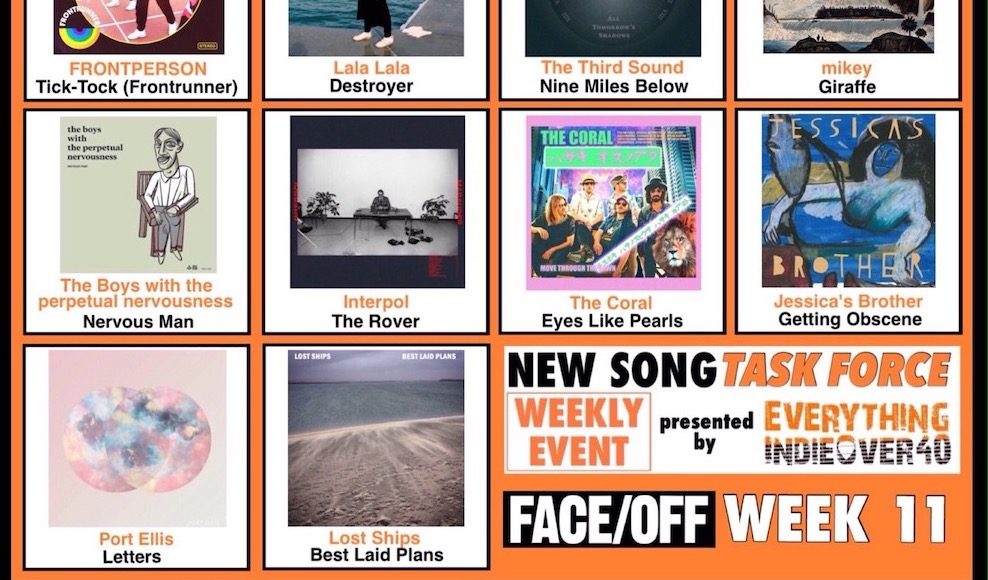 So here is Rob’s review of the Week 11 songs.

Oh I like this intro. I’m already interested. Subtle vocal interplay too. Something odd going on in the distance. Total change for the chorus, that’s good, and a choral vocal at the end. Is that a horn section too? There’s a lot to take in on a first listen. Back to the verse… I do like this a lot. I can’t think of any comparison points, which is refereshing (ignoring the fact it’s Kathryn Calder of the New Pornographers). That chorus is such a dramatic change. Ah, the choral male female vocals remind me of Woodpigeon. That’s good.

Hang on… Is that it? It is ending there? Nooooooo! That should go on longer. So I HAVE to listen again.

I wish the drums were a little louder – especially on the chorus, it would add some heft to the song. But this is really good. Might need to play this a few more times just to work out what’s going on. That transition to the verse is so good. There’s obvious care in the arrangement here, and it shows. That is a really good start to the week.

Now that’s a good start, lightly fuzzy guitars, VU drums… And a double tracked languid female vocal. No idea on the lyrics. Echoing bridge is cool, leading to a quite joyous chorus. I’m enjoying this. There’s extra little guitar parts on the second verse…. That bridge is great, and works well into the chorus. Yet again I’m screaming “Is that it?” I want more. Second listen. This is growing on me, it inhabits its own sound world, but is accessible and easy on the ear. I like this a lot.

The Third Sound – Nine Miles Below

Very 60s sounding intro, hints of Los Bravos “Black is black” of all things! Twanging twelve strings and a Northern Soul drum beat and deep vocals. This is different, but great. And that chorus! That’s fantastic. Loving the vibe on this. Sure the singer has a vague relationship with tunefulness but that’s never stopped a lot of other singers old and new. This is sort of gothic 60s jangle pop, it’s quite a unique sound. Great instrumental break too. And another song which ends quite suddenly. Is that this week’s theme?

Second listen and now picking up some of the lyrics, intriguing. That chorus chord sequence and melody is something special. Definitely psychedelic in mood and performance. I’m picturing a swirling light show, long shadows, Vox Teardrop guitars, tripped out dancers… Definitely a grower. And a stone groove. I think I’ll give the rest of the album a listen.

Clipped little intro, is that a glass smashing? Different. Is that the chorus? I like the addition of extra voices. The backing vox on the second verse spice things up nicely. Harmonised guitar solo too. This is really sweet, all the vocals overlapping…. Is that it? What is it with this week’s songs? They’re all ending too soon for my liking.

Second listen… Actually before we get to the second listen, this song is already imprinted in my head. After one listen. That’s pretty impressive. Second listen then… Lyrics are intriguing. That chorused guitar sounds lovely. Really don’t know the significance of ‘giraffe’. Maybe it’s a reference to the first Stephen Stills album (hands up if you understand that reference). I do like the lyrics too, that second verse is very clever. Definitely worth hearing more of Mikey. After two listens that is totally embedded in my head. Simple but brilliantly catchy.

The Boys With the Perpetual Nervousness – Nervous Man

Nice Feelies reference. Classic jangle pop start, gentle vocals on a bed of backing vox… This is floating my boat today. Did he just mention biscuits? I’ll go back to that. Sounds like classic mid period Teenage Fanclub, which is no problem for me. And the chorus takes a swerve which is lovely. This is perfect summer guitar pop. I could listen to this all day.

I wasn’t joking you know, all these songs are ending too soon.

Second listen. I’m really loving this. Listening to the words a bit more this time and I’m liking what I hear. It hits a moment of nervousness perfectly. In which case the ending makes a little more sense now I’ve listened to the words in more depth. That is quite lovely.

A band I’ve admired from afar but never properly listened to. That guitar part is cool at the start… Speedy drums and steady bass, this is already a very NYC sound. That guitar part is insistent. I hope this is the chorus because it’s great. Loving how everything changes slightly for the chorus, the bass moves and the extra guitars and dropped bars. I’m really enjoying this. Maybe I need to listen to Interpol. Vocal similarity to Ozzy Osbourne during the chorus is slightly distracting. I’m sure that’s just me. This is smart indie rock, and I like it a lot. I keep waiting for it to stop, because all the songs this week have stopped by now.

I knew it would.

Second listen…. Hang on… There’s no actual chords here, it’s all single guitar notes. That’s interesting. I really like this a lot. I still think the way Paul Banks sings “The Rover” on the chorus sounds like Ozzy. That’s not stopping my enjoyment of the song. Excellent stuff.

Another band I know of but haven’t actively listened to. Open your ears Rob. This is instantly interesting, the sound is warm and familar, the chord sequence is arresting and defying conventions. The chorus brings in lush harmonies. This is evoking early 70s memories of America and Bread, US soft rock. There is nothing wrong with that at all. The music keeps twisting in directions I’m not expecting which is cool.

And another short song. But this feels like it’s packed a lot into less than three minutes. Second listen – this is just gorgeous, really. Not a lot to add to what I said on the first listen. As comforting as easing into a pair of slippers before eating a bowl of chicken soup. We could do with more comfort these days so that is definitely not a criticism. Infectious simple pop music is not to be sniffed at. This is quite lovely.

That opening chord…. It’s “Nobody’s fool” by Haircut 100! Only it’s not really, this is hazy fuzzy mid tempo janglesomeness. Reminds me of Velvet Crush actually. That vocal melody is embedded in my mind after the first verse. Nice guitar work too. What do you mean “Give them a chorus”? You’re not going to, because frankly this riff is just too good. Guitar getting wild at the end and oh it’s finished just as it was getting going.

Second listen – I think it speeds up, which is a good sign of humanity. I do like how this steadfastly sticks to it’s one riff for the whole song, it’s a bit Neil Young in that way. And so is the wild guitar at the end. Really enjoying this second time. (Reads Bandcamp description) Oh they mention Neil Young, that makes sense. This could go on for another two minutes or so and I’d be happy with it. I bet it rocks live.

Good intro, that off kilter drum pattern catches the attention. Harmonious female vocals, guitars twinkling too. This is really different, they’ve worked hard on this arrangement, lots going on but nothing distracting from the core of the song. I honestly don’t know where the chorus is. And frankly I don’t care, this is just great. Toes tapping and head nodding. No… Don’t do that! It’s ended! I want more of this again.

Second listen…the bass drops in and out, which is cool. There’s so much to take in, and it’s all great. It’s weird, it feels like it should fall apart and not work, but it’s so perfectly arranged that it holds well. Like… No bass at all in the second verse! Who does that? Nobody! Really very impressed, and loving the song too. I want to hear the rest of this album too.

An instant start, I like that. I also like the Northern Soul drums and that insistent guitar lick. This is different. This also sounds familiar. That guitar lick! A chorus at half tempo, well I never! Harmonies appearing, more guitars and a vocal through some kind of effect, very good stuff. It keeps the listener interested. And that guitar lick is still going. Amazing. And it stops. Which is fair enough because that’s how it started.

Second listen – listening to the lyrics now and they’re intriguing. There’s a story being told here. I do like that change from verse to chorus. And the ending.

Ok, maybe it’s unintentional but just about every song this week has (a) mastered the trick of stopping before it became too boring and (b) made me want to hear it again immediately. Is this some kind of trend? Whatever I may say above, it’s a trend I approve of.

Excellent songs all round this week, thanks to all the task force for a very enjoyable listening experience. 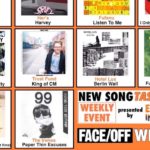 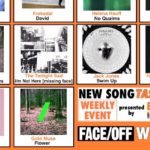