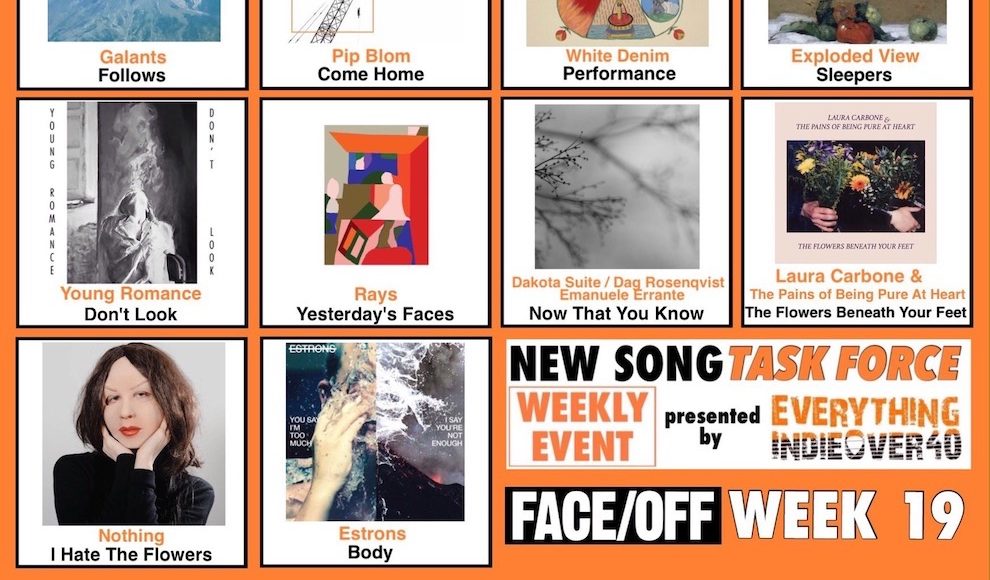 So here is Rob’s review of the Week 19 songs

It’s been an odd old week and I almost missed out one of the songs from the task force but I’m glad I didn’t because it was one of the best of the week.

Now this is how to start the week, with a bang. Lots of drums, lots of riffing guitars and after a short lull, waves of guitars chiming and bathed in reverb, there’s harmonies too somewhere mixed back – and I’m really digging this! Lots of energy, lots of melody. This is speedy shoegazing, if there is such a thing. I have no idea what the lyrics are, they’re pretty much unidentifiable. Ooh hang on, a tempo change after the second chorus – wasn’t expecting that.

A quick peak at their Bandcamp – you can buy their entire discography for under a tenner? Bargain! A definite early 90s vibe here and I’m digging  it. A really good start to the week.

Now someone mentioned Pip Blom in relation to another song I reviewed a few weeks ago, so not quite a new name to me. I like the queasy riff, that bent note making it feel slightly wrong. Simple bass and drums for the verses, and I presume this is the chorus when more layers are added. That queasy riff ain’t giving up.

Like Galants there’s weird little high frequency noises in the background here. A sudden drop at the end of the second verse – nice surprise. There’s a lot going on as the song progresses including new layers of vocals, more drop outs and a sudden ending. And all the while that queasy riff is there right to the very end. Curious, odd but oddly right.

I always listen to these songs on headphones so I can concentrate on what’s happening, and usually this works well, I’ve been wearing headphones since … A long time, ok? But this song is infuriating on headphones for me. There’s this old effect invented by Geoff Emerick for the Beatles “Revolver” album called Artificial Double Tracking, it’s basically a very short delay panning a sound to either side of the stereo spectrum. Listen to “Eleanor Rigby”, you’ll hear it being switched off at the end of the opening vocals.

Anyway… White Denim have used that effect on the main guitar part (which is also gated very hard which is also annoying) on this song and it is driving me absolutely nuts. Which is distracting me from the actual song, which is a speedy little thing which reminds me of Nick Lowe and Cliff Richard at their late 70s power pop best.

Yes, I did just compare this to Cliff Richard. I don’t care, even the keyboard solo at the end makes me think of “We Don’t Talk Anymore”. There’s something else it reminds me of but I can’t place my finger on it. Anyway even with the distracting elements this is a great little song. “Wearing your cap like a bluebird” – are they Cardiff City fans?

Is it meant to start like that? Lots of noise, thumping tom tom drums, droning bass… Layers drop out and a vocal emerges. There’s some strange keyboards going on in the background and the song feels like it’s stumbling along, it’s slipping around keys… Disquieting, but fascinating.

There’s an odd atmosphere here, I really can’t follow what the chord sequence is doing, it feels like members are playing different songs against each other. Very odd indeed. More fuzz guitar, a rising wave of discordant keyboards and a sudden stop. That is just so odd but oddly compelling. I must listen again. I really don’t understand this song but it’s compelling.

Ah some good old fashioned garage rock. Nicely grunged up guitar and bass. After a mid tempo intro, the verse is double speed with clipped little guitar chords, then back to the mid tempo chorus. This is fantastic, by the way. Really melodic regardless of the noise going on around the song. There’s hints of “Teen Spirit” here and there and why not? If you’re going to plagiarise then go for the best. A short sharp shock of a song.  Very powerful.

I sometimes wonder how the Task Force find all this great diverse music. Maybe they spend all day tuned to the radio or something. This is great, I’ve no idea who they are but they’ve got their own little sound. There’s hints of C86 in the speedy jangling, and there’s a groovy organ in the background. Vocals are laconic and droll (a bit like Lawrence from Felt in places) and the song twists and turns melodically.

That lead guitar part is great too. The middle section takes a swerve too which helps. God I love this little song. There’s a lot of care taken getting the right jangle and strum. Lovely! Definitely going on repeat for a while.

A gentle acoustic start which reminds me of a quiet section of “Tubular Bells” (honest). A heartfelt vocal, intimate and breathy, while more acoustic guitars are added. As the song progresses more instruments and voices come in, is that a pedal steel? Very subtle, and i’m hanging on every word here.

There’s a real late night autumn atmosphere here, I feel like I shouldn’t be listening in daylight. Slowly more layers are adding, ever so gently, not disturbing the crepescular atmosphere. And it’s finished in an unresolved way. I want to hear more. What happens next? Definitely a grower.

Ok confession time. I’ve never been entirely convinced by TPOBPAH. Sure I enjoy their music when I hear it but i’m not deeply in love with it like others I know. Maybe I’m just waiting for the right song to click with me (this happened with LCD Soundsystem too, finally clicked recently). Is this the one for me? Actually this isn’t quite what I expected, a country-ish lilt with lonesome slide guitar, mid tempo shuffle and quite lovely backing vocals. Do they have more songs like this?

I’m really enjoying this actually. Nice male female vocals, some lovely harmonies too. After two minutes the fuzz guitars make an appearance but it seems natural. The guitar solo is pure Noel Gallagher, and it pushes the song to a natural climax. That’s fantastic, and I consider myself chastised – maybe I need to go back and listen to them properly because that is a great song and performance.

Nothing – I Hate The Flowers

For a moment I thought my headphones were knackered. I hate it when that happens – all the guitars on the right hand side. Lots of riffing distorted guitars, distant vocals… Gosh is this the chorus because it’s fantastic? That’s a nice swerve. I like the stop start drum patterns on the verses, and the harmony vocals. This chorus is really good, I like how it’s taken a turn away from the standard riffing of the verses.

It’s very heavy but very melodic as well which is a neat (and difficult) trick. The chorus is really digging into my memory too, which is great. Second listen – I think there’s hints of Placebo here, you know. This is really good – a great guitar pop song smothered in layers of fuzz.

And lastly another thumping song. That’s weird – they lose the fuzzy bass on the verses. There’s something odd going on here – the verse moves up a semitone which feels unnatural but fits perfectly. Reminds me of the Posies. Only definitely not vocally. There’s a lot of passion in the vocals and lyrics, and the music is aggressive in a good way, in your face and hard to ignore. I wonder what their album is like. Really shouldn’t say this but… This song reminds me of “We Close Our Eyes” by Go West. Sorry Estrons 8-(

Thanks to all the teams on both sides. 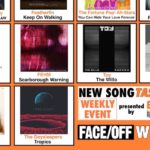 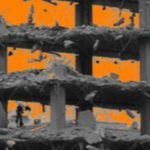